Public rights of way are rights across land exercisable by the public, and which allow them to pass along them at any time they choose. Some rights of way also allow travel by other means, e.g. by horse, bicycle or car.

A record is kept by the local Highway Authorities of the status of public highways, whether they are classified as footpaths, bridle paths, etc. In order for the public to know the status of a particular right of way, some of the local authorities have been classified as Surveying Authorities and have the special task of recording public rights of way on maps known as Definitive Maps. These are a legal record at the date of the map of the existence of that right of way, and the local authorities have a duty to ensure that such rights of way are maintained and remain useable, i.e. not allowed to become overgrown or blocked off. Ordnance Survey use this information when compiling their OS maps. Definitive Maps may not always be shown on OS maps.

Definitive Maps are added to by a statement (known as a Definitive Statement) describing in detail each right of way. The statement may, for example, include details of the width of the right of way, and any restrictions or limitations affecting it; such statements are conclusive evidence of what they say. Local authorities are now obliged by law to allow public access to their definitive maps, although this may involve a trip to your local town hall. 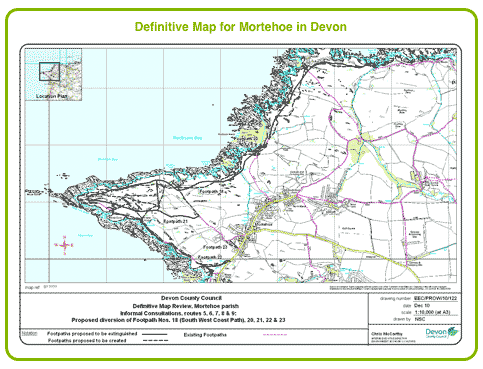 A footpath is a right of way that allows the public to walk along it. It should not be used by horses or bicycles. Quite often the footpath is no more than a rough track without any surfacing material. Where footpaths border the edge of a field they must not be ploughed, although if they cross a field they may be ploughed but a minimum path width of 1 metre must be made within 14 days of ploughing.

As a general rule footpaths are marked by wooden footpath signs, way-marks or posts.

Footpaths may be diverted but only with the written consent of the local planning authority. Applications for such are part of their everyday work and their authority to do so lies in section 257 of the Town and Country Planning Act 1990. Such applications usually become necessary as a result of planning permission given for a development that will be affected by the route of the footpath. In practice the local authority will usually take the necessity of diverting or stopping a footpath into account before deciding whether to grant planning consent.

A bridleway is a footpath where there is the additional right to ride a horse or a bicycle. A bridleway may not be surfaced, and may become deeply pitted and difficult to navigate by foot. The same rule relating to ploughing of fields applies to a bridleway save that where the path crosses a field a minimum width of 2 metres must be restored.

There are many equestrian access groups in the UK, whose role is to defend, extend and promote safe, easy, accessible off-road riding for members of the public.

A bridleway may also be known as a bridle path, equestrian trail, horse riding path, bridle road or horse trail. Bridleways are primarily designed to benefit horse riders although in practice they are used more frequently by hikers and cyclists, who are also allowed by law to use them.

Public bridleways are shown as long green dashes on Ordnance Survey 1:25,000 maps, or long pink dashes on 1:50,000 maps. In addition, permissive bridleways are shown as dashed orange lines on the 1:25,000 maps where there is no statutory right of way but where the landowner permits use, for the time being, as a bridleway. A public bridle path is sometimes way-marked using a blue arrow on a metal or plastic disc or by blue paint dots on posts and trees. 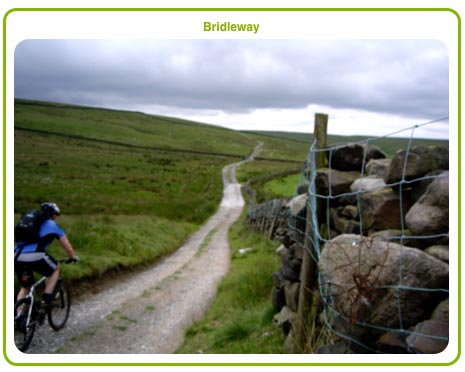 Byways Open to all Traffic (BOATs)

A Byway Open to All Traffic (BOAT) is a highway over which the public have a right of way for vehicular and all other kinds of traffic but which is used by the public mainly for the purposes for which footpaths and bridleways are used (i.e. walking, cycling or horse riding). (United Kingdom Road Traffic Regulation Act 1984, section 15(9)(c), as amended by Road Traffic (Temporary Restrictions) Act 1991, Schedule 1). Byways account for less than 2% of England's unsurfaced Rights of Way network, the remainder being footpaths and bridleways.

A byway open to all traffic is sometimes way-marked using a red arrow on a metal or plastic disc or by red paint dots on posts and trees.

This type of right of way used to be known as a Road Used as a Public Path (RUPP) but was reclassified by the Countryside and Rights of Way Act 2000. A BOAT may not be ploughed or obstructed in any way.

A Green Lane is a Byway open to All Traffic, but have picked up this name because they are so frequently used by off-road drivers. There is no separate legal status for a green lane.

This right of way was created by the Countryside and Rights of Way Act 2000. It allows a right of way on foot, horseback, cycle, horse-drawn carts, carriages and any other vehicle that is not mechanically propelled. Thus cars, quod bikes, scramblers, etc are not allowed. The surface of a restricted byway must not be obstructed, ploughed or similar so as to limit access for the purpose it was intended.

These are unofficial rights of way provided by private landowners, often following an agreement by a local authority, charitable company or countryside body such as the Forestry Commission. They are identified by a sign, placard or similar.

It is important to know that the landowner can divert or stop the path whenever it suits him and that the public have no right of say in such a matter. The use of this type of path is often restricted in some way, for example to allow travel by foot only.

Permissive paths are often used to link sections of a long distance footpath together, to obviate the need to use a road. 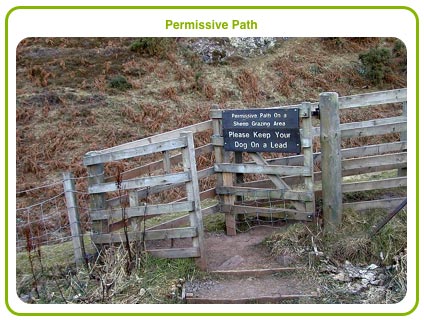 Rights of Way with No Visible Path

Many footpaths do not show any visible track and are usually recognised by shoe imprints along the path, following a bee-line from one style or marker to the next. 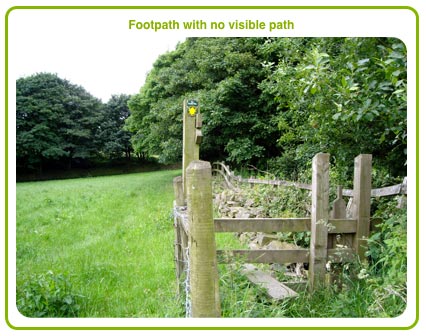 The Countryside and Rights of Way Act 2000 (CROW) provided for many areas of Open Access Land, more particularly over common land and in upland areas. The Act provides for access by foot only to the entire area, provided it is accessed from designated access areas. Some of these areas may be restricted from access during certain dates that are designated by the Act. 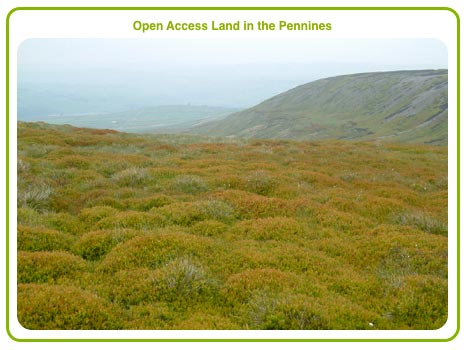 Whilst access is freely provided the owner of the land may make restrictions on how the land is used, although as a general rule they are not of any serious consequence and are often temporary. Open Access Land is not common land.

The right to use open access land is called the right, or freedom, to roam. The right to roam includes mountain, moor, heath, down and registered common land. The right extends to walking, running, watching wildlife and climbing, but usually excludes horse riding, cycling, fishing, camping, taking animals other than dogs onto the land, driving a vehicle and water sports. To access the land for any of the latter you would need either to have the landowner's consent or there would have to be a long established tradition of usage. If a public bridleway crosses the land the bridleway can still be used for its purpose as a bridleway.

Some land, known as "Excepted Land" is not accessible as Open Access Land, save on any footpaths, etc passing through it. This is to protect the privacy of people living and working there, or for public safety.

Further, landowners may close off their land to the public for up to 28 days a year, or more if they need to for land management, fire prevention or public safety.

We provide a CROW map with each of our Rights of Way searches, centred on the property being searched.