Examples of Public Rights of Way

All of the examples in this chapter are based on actual occurrences. Those included do not represent an exhaustive list, and many more examples could have been included. Each property and each right of way is unique. The examples provided represent a broad view of those more commonly found.

The Neighbourhood Search is an environmental search that includes a section on public rights of way within 500 metres of the property concerned. This is a large document (more than 30 pages). The most important sections of this search are as follows:

The Rights of Way section shows a detailed OS map marked with public rights of way.

The rights of way map is centred on the property being searched and shows the area up to 500 metres all around it. In the foregoing sample the numerous photographs surrounding the property can be readily seen.

There is a further section on Land Using Designations

The aerial photograph shows the property and the surrounding area for 250 metres. It is sufficiently detailed to show some of the footpaths illustrated on the Rights of Way map, and to show other public rights of way that may exist. 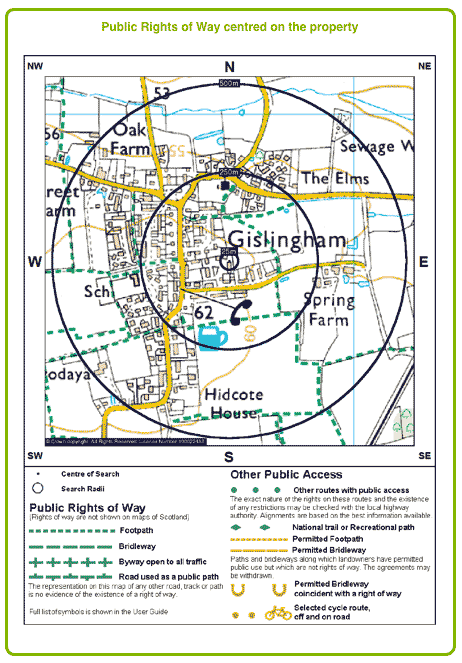 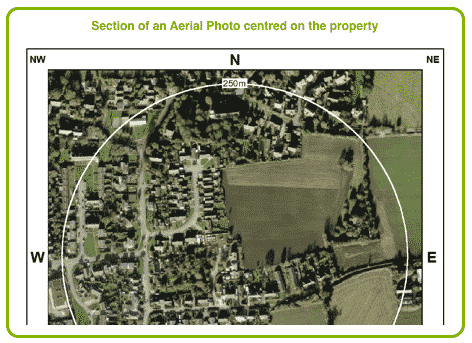 This section may show details of Heritage Environment and Open Land, that may be of interest. It includes a detailed colour map centred on the property and the area within 200 metres thereof, and a detailed legend. Each designated land use is shaded or hatched differently. This is followed by a table providing more details and references to other documents available with the local authority that may affect the property relating to public rights of way, including:

The Neighbourhood Search includes much more information pertinent to the surrounding area, although not relating to rights of way. The final pages of the Search include a list of contacts, which can be very useful for obtaining further details and the further documents referred to above.

In the event that you wish to obtain details of ownership of other rights of way, alleyways, roads, footpaths, etc where you are unsure as to whether they are or are not public rights of way, you may use our Map Search.

This search will provide you with a copy of the Title Register and Title Plan for the property you are interested in. It does not matter that you do not have an address for the property, as we can identify it using a plan.

Until the enactment of the Countryside and Rights of Way Act 2000 (CROW) there were grave difficulties in establishing a right of way over common land or village greens because of several legal decisions known as Hanning v Top Deck Travel Group Ltd and Massey v Boulden. Section 68 of the CROW Act has remedied this situation, and where compensation might be required for the use of the right of way, any such compensation is limited by the Act, restricting the owner of the common land from requiring a large ransom for its use. Compensation may still amount to 2% of the land value, but that is the maximum. The case of Hanning has now been overturned by the House of Lords as being contrary to public policy, with the result that the case of Massey is also now considered not to be good law. 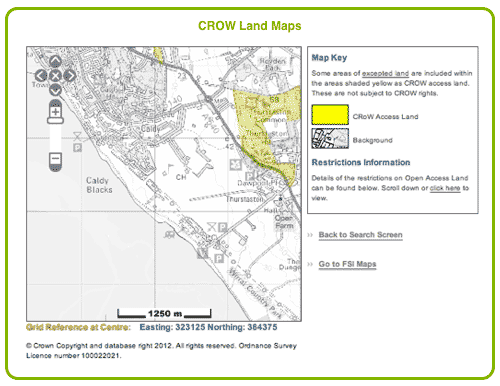 Included with the search is a CROW map centred on your postcode area, and showing an area of 5 kilometres around it. Any yellow highlighted areas on the map are CROW access land, over which there is a right of way by the public.

As well as showing Open Access Land (OAL) the map also shows sections of the OAL that contain restrictions, if there are any.

The Common Land search includes a search of the council's common land and village green registers, and is supported by a detailed plan showing the location of any nearby common land together with relevant details of the common land if there are any.

The term "common land" is often used rather loosely, and many areas named as commons are not actually areas of common land in accordance with the legal definition thereof. All common land is registered and it is a simple matter to ascertain whether or not any particular parcel of land is common land.

The main governing legislation is the Commons Act 2006. However, not all sections of this Act are in force yet and so common land is still partly regulated by the Commons Registration Act 1965. The majority of common land in England and Wales is open access land and rights of way over open access land are regulated under the Countryside and Rights of Way Act 2000 (CROW) (see the former chapter).

The Commons Act 2006 is divided into 5 main parts. For the purposes of this book we are interested in the first part only, which relates to registration of common land.

A register is maintained and updated by commons registration authorities. The register contains details of registered common land, which falls mostly under 3 categories, i.e.

The register contains precise details of the common land, which includes the following:

Rights of the Commoners

The register contains details of Rights exercisable over the common land and states whether such rights are disputed.

Examples of such rights are:

The register also shows any limitations on the said rights and details of the type of stock referred to in rights of pasture, e.g. horses, donkeys, pigs and cattle. Many of the other rights also contain notes that detail any restrictions, e.g. to a particular variety of that right.

The register provides details of ownership. However, it is often the case that the registration authorities do not know the identity of the owner, or there may be several claims to ownership that are pending investigation.

Village and town greens are also regulated by the Commons Act 2006. They are similar to common land and usually consist of small areas that the local residents can access for the purpose of games, galas and sports. A village green register is also maintained by the registration authority.

The Common Land Search is an optional extra for the Rights of Way search, and a separate fee is payable. It can be included with the search by clicking the relevant option on the application form. It can also be purchased separately using our Common Land Search.

The Con 29 Part 2 is an additional enquiry attached to the standard Con 29 conveyancing search made of the local authority, and deals with common land and village greens. The results state whether the property or any land abutting it have been registered under the Commons Registration Act 1965 or the Commons Act 2006.

If any entries are revealed the authority go on to provide details of how copies of that entry can be obtained.

The Registration Authority Plan is provided by the registration authority and is produced on their letterhead, showing clearly the land that has been searched and those properties immediately surrounding it.

A public right of way, such as a footpath, bridle path or restricted byway, can be diverted upon application to the relevant planning authority, provided the reasons for doing so are legitimate and provided that the new route will not be substantially less convenient for the public. The relevant planning authority derive their power under section 119 of the Highways Act 1980. 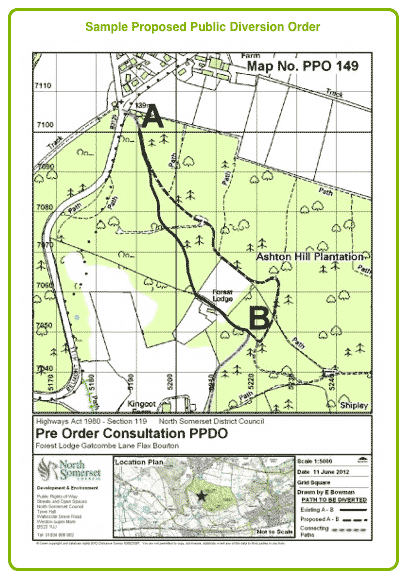 This might occur where a land owner obtains planning permission to develop his property. If a right of way passes through the middle of his land, he may apply to divert it around the edges so that it will not interfere with the development, as for example, where he builds a house upon it.

As a first step an applicant will usually meet with the planning authority's Maintenance Officer, who will assist in completing a Diversion Order application form.

The application is processed in 4 steps:

This usually takes about 6 months, although if there are objections or multiple third part interests, this period can be more.

A Diversion Application Pack with Model Guidance Notes can be obtained from the relevant planning authority.

Where the right of way continues from public land to private land the access structures (gates, stiles, steps, etc) must be maintained by the private land owner.

The Highway Authority will generally do the work but will require the private landowner to contribute 25% of their reasonable costs.

Overhanging vegetation, maintenance of drains, bridges and culverts affecting the right of way on private land should be maintained at the cost of the private landowner.

Obstructions on a public right of way are dealt with by the local Public Rights of Way Officer, to whom a complaint should be made. He can be contacted at the relevant local planning office. So that he can identify the obstruction speedily you will need to provide him with an accurate description of where it is, preferably by supplying a grid reference. 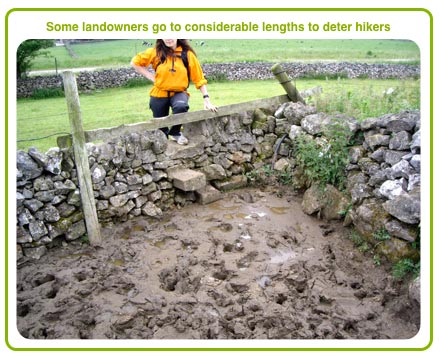 Obstructions on public rights of way may take many forms, e.g. farmers who fence or hedge across them.

In a recent instance in Derbyshire, where a footpath crossed, via a stepped wall, a farmer's land at the corner of his field, he erected an electrified fence each side of the stile and inserted a dripping water pipe into the wall. The result was the path became impassible. Many hikers tried to steer around the sides of the deep, cloying cow swill by gripping the fence at one of the sides, only to receive an electric shock.

Obstructions on public rights of way may take many forms, e.g. farmers who fence or hedge across theIn a recent instance in Derbyshire, where a footpath crossed, via a stepped wall, a farmer's land at the corner of his field, he erected an electrified fence each side of the stile and inserted a dripping water pipe into the wall. The result was the path became impassible. Many hikers tried to steer around the sides of the deep, cloying cow swill by gripping the fence at one of the sides, only to receive an electric shock.

Other obstructions include such things as locked gates, barbed wire fencing, buildings built across the right of way (or a building extension), misleading signs, farm machinery, manure heaps, slurry and intimidation.

Public Rights of Way Officers have enforcement powers to remove illegal obstructions, to recover their costs from the land owner and to place a local land charge upon the property until the costs have been paid. Further, they have power to prosecute offenders.

Where farmers receive payment from the Rural Payments Agency under the Single Payment Scheme, failure to adhere to their rules, e.g. by blocking a right of way, may result in the payments being stopped or reduced.

Where this is the case a complaint should be made to the Public Rights of Way Officer.

Driving a motorbike on a footpath or bridleway is a criminal offence. This offence is enforceable by the police in the same way as road traffic offences. The police may confiscate the motorbike in addition to prosecuting the driver.

A landowner cannot allow a bull that is more than 10 months old into a field where there is a right of way by the public, save where the bull is of a dairy breed and shares the field with cows or heifers (section 59 Wildlife and Countryside Act 1981).

Farmers who knowingly place a dangerous animal in a field with a public right of way can be prosecuted, no matter what its breed or species.

When a field with a right of way must be ploughed the land owner has a legal duty to ensure the path is visible and reasonably convenient to use to at least the minimum definitive width, within 14 days of the ploughing. The land owner must also ensure that the path remains visible throughout the growing period of the crop.