A private right of way is an easement, which is the right to use part of another's property in a particular way even though they do not own it. There are four main categories of easements (or rights), over an adjoining parcel of land. These are rights of way, rights of light and air, rights of support and rights relating to artificial waterways.

All easements have similar properties in that:

An express easement is usually created on the sale by the vendor of part only of his property. The easement will usually be created to allow the vendor to continue to enjoy his remaining property, as where he will require a right of way over the parcel of land he has sold in order to reach his remaining property, or a right to access sewers or drains that used to be on his property, but are now within the new owner's property.

Similarly, the new purchaser may require a right of way over the vendor's retained land in order to reach the land he has purchased. 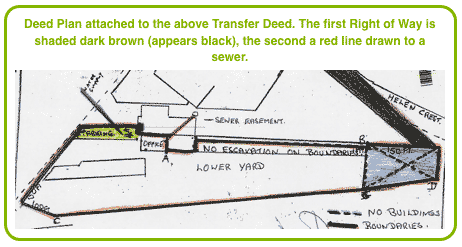 Implied easements are not created by deed but are implied by law, the courts looking at what the original parties intended and how the property is being used.

An implied easement may exist where a vendor sells a parcel of land, retaining an adjoining parcel of land for himself, but where he overlooks expressly granting himself a right of way to allow him to access to his retained land.

An easement of necessity only comes into existence once the court makes an order for the same. Usually the easement is required because a property owner cannot obtain entrance to his land without crossing an adjacent parcel of land, i.e. his property is landlocked. In such circumstances application must be made to the court for the easement on the grounds that it is necessary for the enjoyment of the property. A similar right might exist where a gable wall requires repair but cannot be reached save by accessing an adjoining property.

The court will decide whether to grant the easement by deducing the intention of the original parties and whether the damage or inconvenience would be greater for the dominant or the servient tenement and make an order accordingly.

Easements by Prior Use

It is possible to create an easement simply by having used the property in a similar way before. The court will assume that the parties intended to create it but forgot to declare the easement in the deeds.

In order for such an easement to exist it must be shown that:

Easements by prescription are similar to claims for adverse possession (or squatter's claims) in that they follow the use of land, without the owner's consent, openly and over a continuous period of at least 20 years (10 years for squatters). The main difference is that the use of the land is shared by more than one person. If the owner of the property acts to defend his property rights at any time before the above period has expired then the prescriptive right will cease, and any attempt to re-establish it will have to begin again.

Easements by prescription may arise either:

The right of way claimed must be one that could have been granted in accordance with the law. For example a right of way claimed for the purpose of tipping rubbish unlawfully on land could not have been lawfully granted and cannot be acquired by prescription. On the other hand, a right to drive a vehicle over land that is a restricted byway without lawful authority is an offence, but as lawful authority could have been given then such a right is capable of being acquired by prescription.

It should be noted that prescriptive rights cannot be acquired over railway land or land owned by the British Waterways Board, by virtue of the British Transport Commission Act 1949.

Easements by estoppel are created by the court to prevent an inequitable outcome where the vendor has misrepresented that he would grant an easement to the purchaser but in fact did not expressly grant the same. If the purchaser bought the property and relied in good faith on the existence of such an easement as part of his decision to buy then the court will normally make an order for the easement.

For example, the purchaser may tell the vendor that he wishes to build a garage on part of the land being sold to him and the vendor may agree that he can access the garage by using a particular drive on his land. If no easement is granted by deed to effect such a right, but the purchaser has relied on the vendor's representation in consideration of purchasing the property then he would be entitled to an easement by estoppel.