Map Search (Land with No Address)

A search for a copy of the Title Register is normally straight forward, being based on a property's postal address or on the Title Number. However, for properties where there is no postal address, e.g. a field, infill site or woodland, it is impossible to search in a database for it. Such properties are often described as "The Freehold land shown edged with red on the plan of the above Title filed at the Registry and being land on the west side of Greater Avenue, Tanner, Worcestershire". Clearly it is not going to be possible to search in a database for an address such as this.

We have adopted various unique techniques for identifying such land, which has proved very helpful for individuals, estate developers, builders, cable and pipe layers, forestry companies and similar organisations.

Our Map Search should be used to identify ownership of the following types of property:

As a general rule Land Registry title plans do not show roads, pavements or grass verges outside of a building or parcel of land. However, there is a legal presumption in common law that the property fronting onto the road includes ownership of the paving, grass verge and road to the mid-point thereof. This presumption can be rebutted by evidence to the contrary. Such evidence, where it exists, is usually found within the title register or deeds to the property.

It is the case that all non-private roads have been adopted by the local authority, who enter into an agreement & bond with the developer or builder of the property. This means that the local authority maintain the surface of the paving, grass verge and road, but so far as ownership of the sub-surface is concerned the owner of the abutting house or land (called the "frontager"} is in actuality the owner of it.

It is the practice of Land Registry to outline on the title plan in red ink the property owned, but to exclude therefrom the fronting pavement, grass verge and road. The only way to be sure who the owner is (whether the road is adopted or not) is to search by plan; usually the title plan for the property itself will be used to identify it. The resultant title register and title plan will still not show the road, etc as being within the ownership of the abutting building or land, but you will know of the ownership because it has been provided as a result of the Land Registry identifying the land from the documents you provided.

Because private roads have not been adopted by the local authority disputes often arise with regard to responsibility for their maintenance and upkeep. As a general rule the respective frontagers of a private road will be responsible, at least to the mid-point of the road. It is often not clear whether ownership extends all the way across the road, but a search will clarify this.

In such situations a search by plan is made, either of the whole road, or of the relevant part of the road to ascertain the respective ownerships. 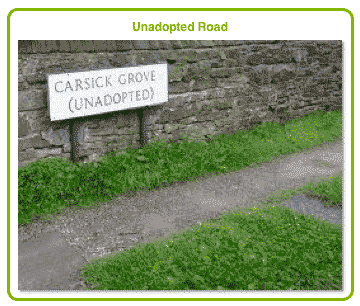 Because of the exacting requirements of the Land Registry UKLRS will usually supply a copy of a suitable plan for its customers. Alternatively customers can upload their own plan direct to UKLRS when ordering a search, or can supply the mapping coordinates on the application form.

Councils keep separate registers of common land and village greens. It is normal to make a Common Land Search in respect of land that has never been built upon, or which at one time may have belonged to a Lord of the Manor, a town or village green or any other land that you believe to be common land such as land used by the community at large.

Small vacant urban plots of land may also be subject to common rights, and many common land registrations affect small areas of land such as grass verges between properties and the public highway.

Whether the identification plan is one that UKLRS has sent to you or one that you have uploaded yourself the land that you wish us to search should be clearly marked and should be done so in such a way as to comply with Land Registry requirements. This will ensure that no errors in identification are made either by UKLRS or by HM Land Registry. When marking the plan the following protocols should be observed: 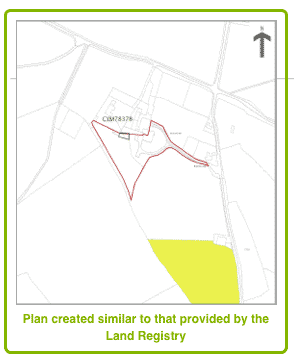 Plan should be Tinted

In this sample a customer has received a title plan from UKLRS showing a nearby property edged in red ink. He has correctly tinted the field he wishes UKLRS to search for in yellow. Note that the plan has not been extended to show the missing portion of the field; it is not necessary as it will have the same Title Number as the visible portion. Also note that the yellow tint does not encroach upon the adjoining fields.

Tint, Rather than Edge or Hatch

The Land Registry use red edging on Title Plans to outline the borders of a property, green edging to outline the borders of parcels of land removed from the title, and often use hatching to illustrate parcels of land within the property that are affected by different rights or covenants. Accordingly it would be confusing if land to be identified was edged or hatched rather than tinted. A light marker pen should be used as per the sample, tinting with yellow or if not available, light pink, light orange or light green. 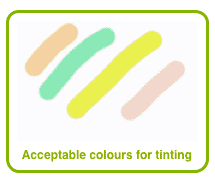 Tinting Must Not Overlap Boundary Lines

If the marking overlaps one of the boundary lines the Land Registry will assume that you wish the parcel of land contained in the overlap to be searched as well, and this may result in an erroneous search. If you wish to search more than one adjoining parcel of land then you should tint all of the visible area of the parcels shown on the plan.

Do not Extend Plan or Mark Outside of Plan Area

The Land Registry will not accept any plans that have been extended, i.e. attaching another sheet of paper with the use of cello-tape, or plans whose borders have been exceeded with further drawing or shading.

Instead, mark the extent of the land that can be seen on your plan, even if it is not all visible. The title number for a parcel of land is the same for a small portion of it as it is for the whole of it, so it is not necessary to identify those areas not visible. 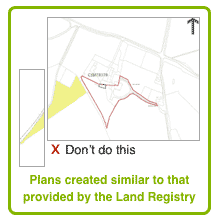