Whenever a leasehold interest in property is granted it is carried out by creating a lease. The formal expression for a legal lease is "Term of Years Absolute". It can be for any period of time, and many leases are granted as monthly tenancies. This guide, however, is aimed at long leases, most of which would be granted for typical terms of 99 years, 125 years and similar. The lease describes the contractual terms between the person granting it (the lessor) and the person to whom it is granted (the lessee).

Leasehold estates are often created by developers. They will usually purchase the freehold estate of a large parcel of land and then produce an estate plan, dividing the property into smaller units, upon which they erect houses or flats.

A lease is created for each property and an application is made by the developer to the Land Registry who will then grant a separate leasehold title for each of them. In such cases there will be:

Many leasehold properties are created where a person owns a large house and converts it into flats. A lease is created for each flat and separate leasehold titles are granted by the Land Registry.

As a general rule, all registrable leases created after 18 June 2006 must contain Prescribed Clauses, which are defined by the Amendment Rules cited above.

Leases that Must be Registered

Within 2 months of completion of the purchase of a leasehold estate an application must be made for registration at the Land Registry where the lease is for a period of more than 7 years (or where more than 7 years remains on an existing lease). This period used to be 15 years prior to the Land Registration Act 2002. This means that far more leases are now compulsorily registrable than previously, and at some point in the near future this period is likely to be further reduced to 3 years.

There are other types of leases (e.g. discontinuous leases) that are also compulsorily registrable, but these are beyond the scope of this guide.

All of these persons may have a registered interest in the property, which would be as follows:

Leases that May be Registered

A lease created prior to 2006 may be voluntarily registered where there has been no disposition (e.g. sale or mortgage) and where there is more than 7 years remaining.

Particulars of Lease and Noting the Lessor's Title

The A section of the Leasehold Title Register contains short particulars of the Lease from which the Register has been created, which include the date it was created, the length of the lease (term), any rent payable and the names of the parties.

Where a lease is registered with its own title, the leasor's title will be noted to this effect.

Subject to certain uncommon exceptions (an exemption must be applied for), leases granted after 18 June 2006 must contain Prescribed Clauses as set out in Schedule 1A of the Land Registration Rules 2003 as amended.

The Prescribed Clauses will appear at the beginning of the lease, immediately after any front cover and list of contents (if there are any). 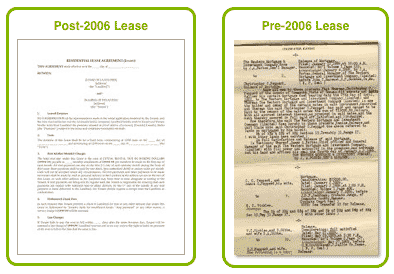 There are 14 Prescribed Clauses, although most modern leases contain other information in the same format for ease of reading.

Schedule 1A lists the Prescribed Clauses.

Obtaining a Copy of the Lease

Where a lease was granted prior to 30 October 2003 the owner's written consent to obtain a copy of it is required. After this date no such consent is necessary. Where consent is necessary, we will send a form of authority to you for you to sign and return.

Merger of Freehold and Leasehold Estates

Where the owner of a leasehold title acquires the freehold title, as for example, where the leaseholder purchases the ground rent, he may apply to the Land Registry to merge the titles, Provided he is entitled to each title in the same capacity, and provided that any entries in the leasehold title that would prevent a merger are first cancelled, then the application will succeed.

As from March 2015 the Title Register for all Leasehold registrations that involve floor levels will contain 2 changes:

1 A separate Information Note will be added to the A sesction of the Register after the Property Description. An example of this provided by HM Land Registry in their practice guide is:

"The leasehold land demised by the lease referred to below which lies within the area shown edged red on the plan of the above title filed at Land Registry and being Flat 4, Smith Street, Anytown (DA1 4XX).

NOTE: The flat is on the first floor."

2 A Title Register will no longer refer to additional parcels of land that form part of the Title, such as a garage, parking space, garden or bin store unless the same are subject to a floor level limitation. In such cases there will be an Information Note in the A section of the Register. An example of this provided by HM Land Registry in their practice is:

"The leasehold land demised by the lease referred to below which lies within the area shown edged red on the plan of the above title filed at Land Registry and being 26 Regents House, Richmond Road, Cowgarth and parking space (CK3 8RN).

NOTE 1: The flat is on the first floor,
NOTE 2: The basement parking space is included in the title and excludes the subsoil below."

The Leasehold Title should always be read in conjunction with the Lease, so that the intention and meaning of the contracting parties is understood.